I am trying to be a holy mofo and know about basic stories in the Bible. Obviously Moses is pretty important because I knew his name before I started reading his story. Also, a lot of people name their dogs Moses, so I mean I have had exposure to the name from petting dogs. I did not, however, know Moses from the Bible. I did not know that Moses was found in a river. Like this little dude was just chilling down the river. That is wild. He was seriously floating around like it was nobody’s business.

So here we have this guy, Moses, who does not get found like Avril Lavigne was discovered. He was not particularly good at anything, while Avril was born a star. Fight me on this one. In fact, Moses was a dude who could barely speak without stuttering or saying the wrong things. I kind of picture him to be sort of like Michael Scott on The Office.

Michael is a manager with no friends and no family who kind of forces his employees to fill those roles. Moses is a little guy from a river with initially no one either. Besides his sister who was fine with letting him go floating about. So she does not count. Michael cannot go a day without saying “that’s what she said” after something that was not even meant to be taken  sexually. I imagine Moses was not saying that in between words because I mean, this is the Bible people calm yourselves, but I do imagine he got caught up in sounds or said the wrong things at the wrong time  because he actually was like dude God why do I have to go to Pharaoh I cannot even speak.

Which leads me to the absolutely crazy part. Michael is the only branch manager that makes profits despite his jokes just like God chose this random river baby to do this incredible task. Moses did not have any special skills. He was not above anyone else. He literally came from who knows where from a river. And his speaking skills were actually below everyone else’s. Like there is no way this guy was in TAG in elementary school amirite people #lolz.

Imagine finding a child in a river with no specific talents. You would be like WTF you doing in there little guy?!

He does not see me as that girl that charged a cop. Or that girl that walked straight into a pole on the sidewalk. He sees me as full of worth and ability. He sees me as someone who can do incredible things to further the glory of God on earth. And he most definitely sees you like that, too. 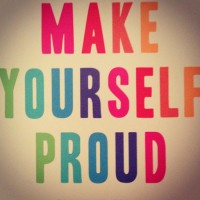 Student of Life. Advocate for serious joy in Christ.

Essays and Devotions Offering Strength, Encouragement, and Wisdom in Life

~hope is the only thing stronger than fear